A huge Hello from John

My Sweetie came through again last night. I am still totally amazed. Some days I feel I should be used to the ways that John still shows me that he's around. Then other days I doubt and think maybe I am just making all this stuff up to make myself feel better. I think we all have those feelings from time to time.
But last night was unmistakable.
Let me explain.
A friend of ours - John's and mine - came into town this weekend to be with his family. George and his girlfriend were staying with his sister. He texted me on Friday to say Hi but didn't think we would be able to meet because his schedule was so full with family get-togethers. Then, lo and behold, his Saturday evening became free and he wanted to know if we could get together for drinks and snacks.
Of course, I said yes.
I have always enjoyed George's company. Our history goes way back. Years ago - many years ago - literally 34 years ago - John and George met in nursing school. Both were older gents who were going back to school to start second careers. So, these two wonderful people met and struck up an instant friendship. I remember John coming home and telling me about his friend George long before I ever met him.
A couple of years passed. They both graduated.
By this time I was Head Nurse of a children's psych unit in Wilkes Barre PA and needed a staff nurse. John told his friend to apply. He did. He got the job. It worked out great. George was a wonderful nurse and an awesome person and we all got along. George was now my friend too. Officially, a "family" friend.
More years passed. John and I moved to AZ. George visited a couple of times and then, as often happens, we lost touch.
Fast forward more years.
One day I got an email from George. He had been surfing the Internet and looking up people he knew and sadly, he had found John's obituary. He also had found my writing web site and thus was able to get my email address. So, he was writing to say how sorry he was to hear about John and to ask how I was doing.
I was thrilled to hear from him. We caught up. As luck would have it, George has a sister who lives just one town over from me so the next time he was in town visiting his sister we had dinner and renewed our friendship in real time. And talked of John, of course, and remembered and smiled.
So, now through the magic of technology, we can Facebook and text and keep in touch.
And that brings me to yesterday and dinner at Z Tejas in Phoenix.
As I was driving to Phoenix to pick up George and his friend so we could go to dinner, I talked to John. I do that a lot when I drive. I enjoy our quiet time together.
Anyway, I was telling John about the upcoming time with George and invited John to join us, to be with us and have fun as we always did when we got together.
And then I just let that thought go. John was going to do with it what he would.
I picked up George and Fran and off we went. I had made reservations for 7:30. We arrived and I told the waitress we were there. She grabbed 3 menus. I whispered to her that we needed a quiet table because we had a lot of catching up to do. She nodded understanding. Mind you, I had purposely chosen this particular restaurant because it's usually pretty good for conversation and the other restaurants I had researched for this evening all touted "entertainment" which translates into shouting if you want to talk to your dinner companion. So, I had picked this one precisely for no entertainment.
And then, just as we started following the hostess to our table, I heard the strains of a guitar being tuned up and the guitarist mumbling something to the audience as he started to play his next song. He was in the bar area and I couldn't see him but I could definitely hear him. The words "oh, crap" may have been muttered under my breath.
And then...
And then...
He started to sing and I instantly recognized the song - "Lyin' Eyes" by the Eagles.
Anyone who knows me or who has read my book knows what that song means to me - and to John.  It's one of the ways that John says what I call "Hello's" to me. I knew what it meant.
John was there. He was smiling and happy and he was going to enjoy time with George too.
I was thrilled. As it happened dinner conversation eventually turned to George saying "So, what's new?" and I filled him in on my latest metaphysical doings and I was able to explain what had just happened.
But even if I hadn't been able to do that, I knew what had just happened and it was enough. My heart was full.
Hello, John. Have a seat. So happy you can be with us. Let's all catch up.
Namaste.
Posted by Joy Collins at 7:14 AM No comments: 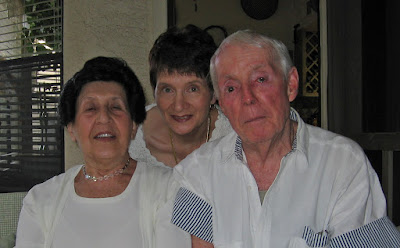 This has been a very hard week for me and my family.
Last Sunday my aunt and godmother Mary Flowers passed away.
My aunt was more than my aunt to me. She was my second Mom and even saying that doesn't do it justice.
Next to losing John, this is the next hardest loss for me. I bonded with Aunt Mary from infancy. My mother was not the most affectionate mother. My aunt tells me stories how she used to come home from work [she was 19 and working as a secretary in the city] and my mother would be busy doing housework and she would tell my aunt to "go play with the baby" [I was only months old]. My aunt told me she didn't need to be asked. She enjoyed nothing more. She would put on her Frank Sinatra records and she would dance around the room with me.
When my mother was being crappy to me when I was growing up, it was my aunt that I turned to for unconditional love. She was always there.
Always.
She was a constant I could rely on no matter what. When Alzheimer's took her, it was very hard for everyone. And now she is not suffering anymore so that's good.
I know she is still with me. But we all know it's not the same thing.
But I'm grateful for what I had. I know I am lucky and blessed.
I know she and her husband are so happy to be back together. She and Uncle Al were married for 68 years. he passed earlier this year and she missed him very much. Even in her confusion she was always searching for him.
I know the memories will sustain me until we're all back together.
Aunt Mary will always be in my heart.
♥
Posted by Joy Collins at 2:21 PM No comments: