I asked John for a sign from him this week since this week is our anniversary.
He came through twice and I am blown away.
The first time  was on our anniversary day. I had scheduled a massage for that afternoon, and afterwards, when I got in my car, I turned on the power to the audio system. I "felt" that John wanted me to turn on the radio but before I could change the source to radio it synched to the bluetooth on my iPhone and "You Needed Me" started playing. "Our " song, our wedding song!
Then today I made a phone call to a friend about selling John's antique car parts. This friend knows someone who might be able to help me. But the friend wasn't available so I left a voice mail. I no sooner clicked off that phone call when my phone, for no apparent reason, started playing our wedding song again!
It just started playing all by itself.
It had to be John again.
I love you, John. Thank you.
Posted by Joy Collins at 5:32 PM No comments:

John and I loved to tell the story of our wedding reception.

The place we had our celebration was a bar called Vispi's in Edwardsville PA.
That's where some of those pictures were taken that I posted.
It was kind of a gay bar but not - everyone went there - remember this was 1981.
It was a very nice upscale place but lots of red flocked wallpaper, sofas, stained glass, etc.
We were regulars there - the owner and staff knew us.
Anyway, that Spring the bar burned down.
So they were in the process of rebuilding and opened back up the month we were getting married. We didn't know what we wanted to do for our wedding.
We were essentially eloping - we only made the decision to get married earlier that month. In fact we made the decision right in that bar.
We had about 20 friends we wanted to invite. Our parents knew nothing about all this until after we got married.
So we were at the bar the first week it opened - they hadn't had their Grand Opening yet and we were telling them about our upcoming marriage.
They told us if we had the reception there they would give us a good deal.
Did they ever!
They gave us hors d'oeuvres and open bar for two hours for $35!!!!!!!!!!!!!!!!!!!! Including a champagne toast!
They figured it was good advertising and the guests would linger afterwards, which they did.
And they gave us a lead on a guy who baked our wedding cake for $10. He was an ex-con who learned baking in jail [for manslaughter]. He sold cakes out of his house.
So our wedding reception cost us $45.
You can't make this up.
Posted by Joy Collins at 4:54 PM No comments:

32 years ago today, John and I eloped. We were married by a JP in a little courthouse in Wilkes Barre, PA and then had a small reception in our favorite hangout with a few friends. It was the most wonderful day.

Posted by Joy Collins at 8:16 AM No comments:

Missing you, John. So much.
Saw this today on Facebook and it's as though John was reaching out to me. 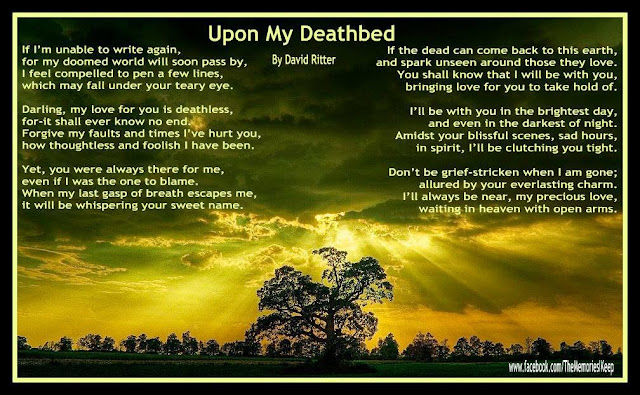 This message keeps coming up this week

I've been asking John for a message and this week I have been coming across messages with the same theme - "I'll see you again". I know that's what he wants me to know.

What I Wouldn't Give

I was driving along in the car today playing my new Glen Campbell album and this song came on. I felt it was directly from John since I was thinking about him and wishing he was with me. It made me cry. I know John was talking to me.
The lyrics and video aren't available on the Internet yet but here they are. It's a beautiful melody. 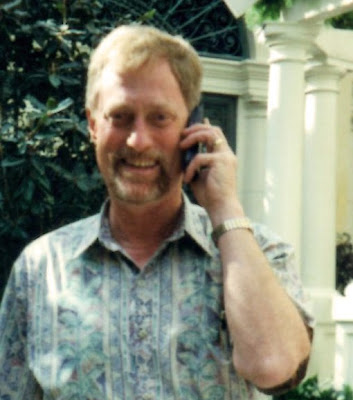 Posted by Joy Collins at 6:37 PM No comments:

This past Sunday I took myself to the movies and saw a lovely film called Still Mine. Based on an actual story, it is a touching love story about a couple in their twilight years. It tells how Craig Morrison (Academy Award (R) nominee James Cromwell) defies bureaucracy when he sets out to build a more suitable house for his ailing wife Irene played by Academy Award (R) nominee Geneviève Bujold. It is about the enduring love between a husband and wife, married for over 60 years and how they face the problems of aging and frailty, never losing sight of their devotion to each other.
Of course, it made me think of me and John. The lead male character had  a lot of traits just like John including doing a lot of building all on his own.
John and I had looked forward to growing old together. We were just starting to feel the changes associated with aging. I am very sad that we missed out on that. I loved John from his 30's to his 60's and knew I would love him forever. Yes, we both knew we no longer looked as we did when we first met. But our love was deeper too. Health problems, sagging skin, less energy - none of it mattered. I loved everything about John. I feel robbed of the opportunity to know him in the twilight of our years.
I miss sharing that with him.
I started scanning more pictures yesterday. I dread coming to the end of the pictures but for now I am enjoying going through them. This is John with baby Jessie in July 1999. John was 56 years old. Jessie was only 7 weeks. 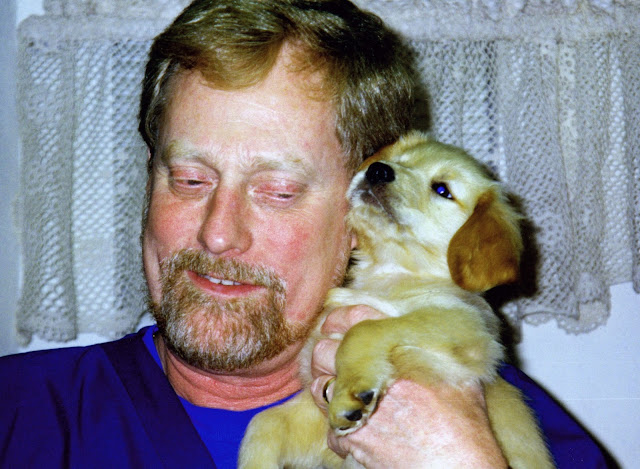 I bought this chain with charms this week to commemorate John. It has a beautiful saying, his initial, and a stone to signify April, his birth month. I have decided this is my anniversary present to me from John. 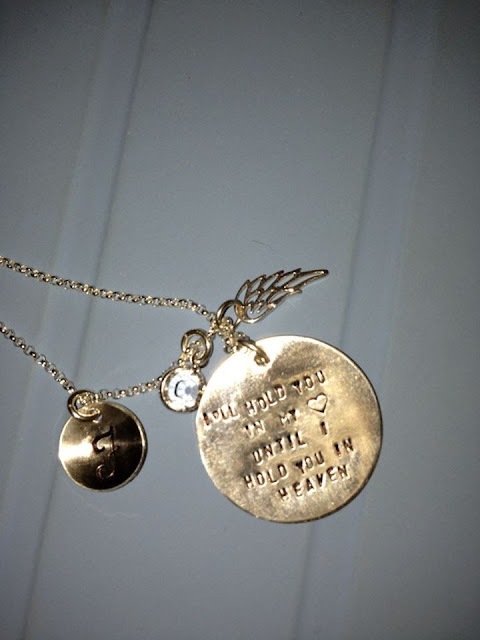 I also had a beautiful Hello from John today too. On my way to lunch with a dear friend, I turned on my car radio and was attempting to synch my Cloud player with the speaker system to play some songs. Instead the car synched two songs from my iPhone. They were "Lay Lady Lay" by Bob Dylan and "You Needed Me" by Anne Murray - two songs that mean a lot to me and John. I know John had those play for me because I was feeling down and missing him. He was reaching out and saying "Hi, I'm still here and I love you." I love you, too, Sweetheart. Always.
Posted by Joy Collins at 5:37 PM No comments:

Until I met you 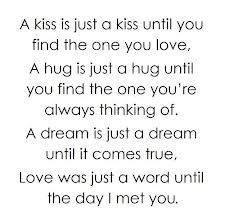 Posted by Joy Collins at 9:17 AM No comments:


I have been reading metaphysical books about the afterlife like crazy ever since John passed. I have this insatiable need to know where John is, what he is doing, that he's OK.
The book I am reading now said something that touched me. It talked about letting go, not meaning that our loved ones are leaving us but releasing them so that we can have a new relationship with them in the way they are now, so that they can reach out to us. The book said that when we hold on to the past and mourn heavily that it blocks communication.
And so I was driving today and thinking about that and listening to this song and the words took on new meaning.
I know - I trust - I believe - that John still loves me with all his heart just as he did when he was here physically. And I still love him, maybe more than ever. So I need to allow him to forge a new relationship with me so that we can still be together - him where he is and me where I am now - until we can be together again.
And suddenly I felt good inside. I felt John loving me. And I realized I was actually smiling!
Smiling!
Can it be that that is the answer?
Can it be that simple?
I felt I heard John telling me in my head that this was the answer.
To trust him.
To continue to love him.
That he would always be my John.
Always.
Always.
Posted by Joy Collins at 5:45 PM No comments: