Wow, it's been over a month since I have posted. I don't think I have ever gone this long. But I have not been feeling well.
I spent part of last Sunday night/Monday morning in the ER. I'm ok now. But I was pretty scared at the time.
The details aren't important now. All is well.
But I do have a John story attached to my ER adventure.
As all of that was going on and I was driving myself to the ER, I talked to John and asked him to be with me and help me.
Nothing unusual happened until I was having an ultrasound of my legs [they were thinking I had a blood clot - I didn't].
Anyway, somehow this nice woman who was performing the test and I started talking during the procedure and it turned out she had lived in the same part of PA that John and I did before we all moved to AZ.
At one point she lived just blocks away from us in Wilkes Barre!
So I got to talk about so many familiar places with her as we reminisced which relaxed me.
And of course I got to mention John's name which always makes me feel better.
I know he had a hand in that.
Then the icing on the cake was when I found out that that night was her LAST night working there. I was one of her last patients.
You know that was not just a coincidence.
Thank you, John. ♥ 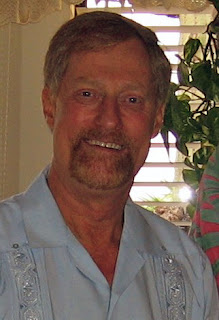