I woke up feeling so happy this morning. It lasted for several seconds. In fact, I couldn't understand why I was feeling the way I did. The feeling was foreign yet familiar.
Foreign because I haven't felt that way in a long time. Familiar because that was the way I woke up every day for over 30 years.
It was that old feeling that all was right with the world. It was a feeling of comfort.
Then I remembered what I had been dreaming just before waking up.
I was dreaming of John and home. The dream was silly by waking standards. It was full of mismatched shoes and the cats being funny. But John had been in the dream and the setting was here, in this house, and it was everyday stuff and it was normal. We had been talking and laughing and it had felt so good.
And it was that good feeling that lingered in those first few seconds of waking up.
And then I realized the truth.
John isn't here.
Nothing is familiar and nothing is normal.
Oh, but those seconds had felt so good.
And I'm grateful to have had that, even in dreams.
It reminds me of how good I had it.
And how good I will have it again when we are reunited. 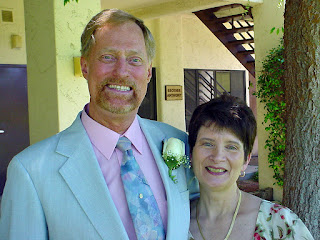