The music that is John's name

There is a meme running around Facebook on the grief pages that essentially says something along the line that you shouldn't be afraid to mention the name of someone's loved one who has passed. You won't be reminding us that they are dead and making us sad. We already know they are dead. But talking about them makes us happy.
That was the long way around to saying what it said in much shorter pithier terms but I'm sure you get the idea.
Tom Zuba author of Permission To Mourn is a grief expert, if there is such a thing. He has experienced a lot of loss in a few short years [his son, his baby daughter, and his wife] and he has made it his life's work to change the face of grief and how we the grievers and you the supporters of us react to and experience grief. We who mourn owe him a lot.
So, the point of my post today is to reiterate what I hope I have already made obvious - please do not shy away from talking with us about our soul mates whom we have lost.
I had a very nice experience myself just last week. My air conditioner was due for its annual check-up and I went with a new [to me] company. The technician they sent was probably one of the most upbeat and happy people I have ever met. In fact, he reminded me a lot of my John. This man's name was Rusty and he smiled all the time. He was efficient and knowledgeable and we fell into an easy conversation while he wrote up my bill as we stood in my kitchen. We talked about many things and as we Arizonans often do, we got around to talking about where we lived before coming to AZ and why we chose AZ. I can't tell my story without mentioning John because it's all wound up together. Inevitably, Rusty asked what my husband does for a living now and I had to explain that John had passed away in 2010. Rusty said the usual "I'm sorry" but he didn't leave it at that. No, he mentioned that John must have been very young [thank you, Rusty - that must mean I look young too :)] and he was even brave enough to ask me what happened. So, I was able to tell my story. I got to mention John's name several times. I was in the company of someone who cared and showed interest; who didn't change the subject and make me feel uncomfortable.
Rusty will never know what a gift he gave me that day.
So, I am telling his story here so that his example will live on.
This young man knew innately what I have often said.
I know John is gone.
Talking about him isn't going to make me sad - or sadder.
In fact, it will do the exact opposite.
For those few minutes, talking about John made him alive again.
John and I were together for 34+ years.
He was the person I laughed with, loved with, argued with, made up with, vacationed with, ate with, sat on the deck with, drank wine with, slept with, worried about, kissed, hugged - and a million other things with.
Just because he is gone now doesn't erase all that. Being able to talk about him with someone is a treasured gift. 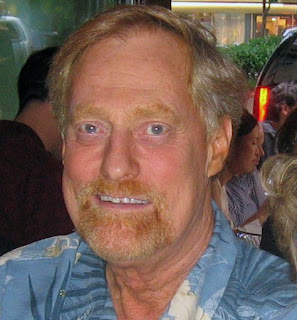