A birthday Hello from John

Yesterday was my birthday. It was a happy day - I had lunch and dinner out with dear friends and I also received an unbelievable amount of birthday wishes on Facebook as well as cards and presents.
I am truly blessed.
And yes, I missed John. Occasions like this always make us wish we could celebrate them with those we love and yesterday was no different. The day would have been perfect - beyond perfect - if John had been here physically with me.
But he wasn't and I know that.
Yet, he managed to get a message through to me several times in ways that I knew it was him - a song, two perfect white doves and a message from Susanne a wonderful medium who is also a very good friend as well.
She wrote me:
"Happy Birthday & Many Blessings! J is sending you something with the clock

I was shown an older looking clock...?"
I couldn't imagine what she meant. All day I kept waiting for something to come through via a clock but the day ended and nothing appeared.
But today I think I have my answer.
The back story is that many years ago John had built a fireplace for us in our bedroom. He even had planned eventually to use gas when it became available in our area and so had stubbed out a pipe through the wall for that purpose. We loved that fireplace and used it often. But since he has passed I am reluctant to use for fear of fire danger and also the work involved with cleaning it out and making sure the flue was in good working order. But I missed the ambience of the fire. So, a couple of months ago I had decided to convert the wood-burning fireplace to an electric fireplace, using an insert. My handyman told me it was possible.
And today was the big day. Tim admired John's handiwork, saying he could see how meticulous he had been with the brick work. It felt good to hear him say that. Tim also warned me there was going to be a mess and a lot of noise because he was going to have to drill between the bricks to gain access to electricity. When he slid the insert in, it didn't quite fit because of the gas pipe stub so he told me he was going to remove it as well. I left him to his work and went about doing some chores.
A few minutes later Tim came looking for me all excited.

"You're not going to believe what happened," he said. "Come see." 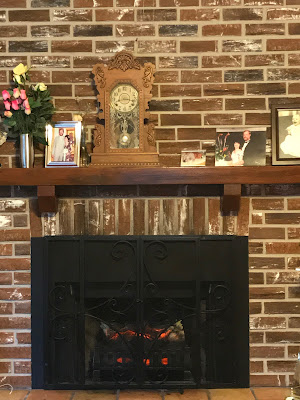 I followed him into the bedroom where he showed me the hole where the pipe had been. He then explained that he had snaked the electrical wire through it to see where it would go. Lo and behold it came out right by the electrical connection on the wall next to the fireplace, the exact spot he needed to tap into. There would be no need to drill anywhere. He couldn't believe his luck. We both felt John had intervened and actually helped him out. Tim looked heavenward and actually said "thank you".
The rest of the work went very smoothly and I now have a beautiful fireplace and can use it any time I want.
And the clock connection that Susanne had told me about?
If you look above the fireplace you will see an antique clock. I had given it to John many years ago as an anniversary present. It is one of his favorites. I feel sure this was what he was trying to show Susanne yesterday.
Posted by Joy Collins at 5:21 PM