I miss cooking. Not the every day type of cooking. Not the "We're home from work and it's late and we're starving and what can we throw together?" type of cooking or even the usual run of the mill every day cooking.
No, I miss the cooking days John and I used to have every so often. There were some Saturdays that we would decide to make soup and it would literally take all day. There was one particular soup that was our favorite - potato soup.
Potato soup started out early in the morning by peeling a mound of potatoes. Then we made what was called Garbage Soup. This was a soup that was simmered for hours by making a soup of the potato peels and lots of garlic and spices. This made a broth to base the potato soup on. Some of it we saved and froze for minestrone on another soup Saturday.
After the garbage soup was just right we made the wonderful potato soup. Its aroma would fill the apartment, making us hungry and impatient. To tempt our taste buds even more, I would bake some bread to dunk in the soup. In the early days I made the bread by hand, kneading it on the kitchen counter top, getting out any frustrations from life in its bulk. Later, when we had more money, we bought a bread maker and just timed everything to be ready together.
Then - then! - that evening we would sit down and feast on our day's work - potato soup and crunchy bread. A feast for a king.
Was it an especially tasty meal? Yes, because - potato soup. What's not to like about potato soup? But there was more to it than that. 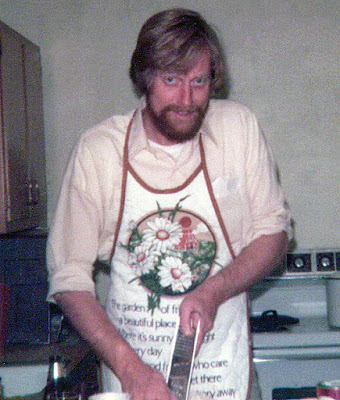 Making potato soup is one of my favorite memories about my earth life with John. I go back to it often. And I talk about it to my friends with fondness. Making soup with John was a treasure because we spent happy time together. We laughed. We talked. We played with our fur-babies. We hung out in the kitchen all day together. Nothing else mattered on those days. We lived in our own world surrounded by good smells, good food, and love. Lots of love.
There were other meals that we made that took all day, too - lasagna and fried chicken are two that I remember. Each of them reside in my heart for the same reason - more for the love than the actual food.
Today I eat a lot of frozen dinners, usually in front of the TV. Dinner for one just doesn't have that appeal. I could make the soups and lasagna again but it's not the same. I'd rather just cherish the memory of the days I spent with John.
But I miss the cooking - and I miss him.
Posted by Joy Collins at 9:29 AM