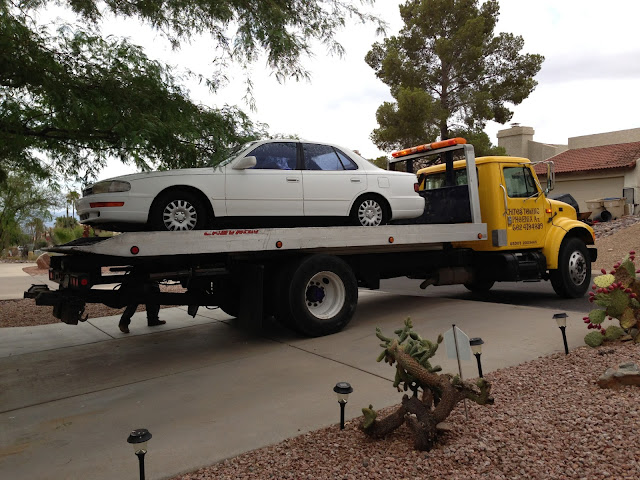 I am donating John's car to the Arizona Humane Society. It will be auctioned off and the proceeds given to the animals. I know John will be happy with this but it's hard to let his car go.
They came for it this morning.
The paperwork was ready.
I had emptied out the car over the weekend and I took some pictures of it.
I knew this was going to bother me but I am a little surprised by how much.
It's going to be so strange to not see it there in the garage.
I think on some level I was able to fool my heart by seeing it there. I could pretend John was still here because his car was in the garage.And I could sit in the place he sat and drive his car and feel closer to him.
Now I have no cars that he ever drove.


Cars and John were synonymous. He always had a car he was working on so he always had more than one car around all the time, one he was driving and one he was playing with. And then of course there would be the car that I drove. Sometimes that would be an antique too like the old Mercedes sedan he bought me one year.
Our first date was in an old Plymouth 1939 that he was restoring that he lovingly called Big Mother. When I met John he was driving an antique Austin Healy. During our life together he bought and restored and sold many antique cars. They were his passion.
Now for the first time since 1980 there will be one car, just mine.
I remember teasing John about this car when he bought it because it was so old and not the prettiest. I wanted him to get something nicer.
He said it was serviceable for work and that's all he wanted. And it was a good car, a Toyota.
He also said it was probably the last car he was ever going to buy for himself.
I laughed at him and said that was ridiculous, that it was unreal to believe that in the next 20 years or so he was never going to get another car.
How did he know?
I am so sad and heartbroken.
Posted by Joy Collins at 10:51 AM