There is a myth that has been perpetuated for years that we replace all the cells in a human body every 7 years. It's not true. Or rather, to be more accurate, that is partially true.
Cells are replaced in our body at various rates of turnover. And some cells - the neurons in our brains - are never replaced.
But it's a nice romantic thought that we can be born anew every few years. Which begs the question - why can I not lose these 10 pounds? But that's a story for another day.
Yet, this theory, flawed as it is, does add some romanticism to the number 7 and change.
And so I find myself coming up on the 7th anniversary of John's death and looking for the magical renewal. I can't say that it has happened although I do feel that I have come a long way from the person I was almost 7 years ago when I awoke on the saddest day of my life.
I've learned a lot - about grief and myself. Being a widow was not something I contemplated on May 23rd. But on May 24th that is what I was.
I have grown into this unwanted role and attempted to come to peace with it. It has not been easy.
One of the things I struggled with most was realizing and accepting that John was not coming home ever again. For a long time I didn't want to change anything - not one thing - in the house. It was as if my brain and my heart were afraid he would return and wonder where things were, where his stuff was. And truth be told, I needed to pretend that was the case. To do any less would have invited madness.
But time does heal. Slowly.
And so finally this past month I was able to take on the monumental task of transforming John's office into a space I could occupy. 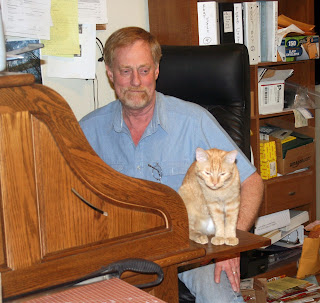 John had turned the bonus room off our bedroom - a small room with no door, just an archway - into his own little room, complete with oak rolltop desk, bookcases, computer, etc. It wasn't pretty but it was functional and it was his own space to do with as he pleased.

After he died, I couldn't even bear to go into it. Just being in there for even a few minutes gave me physical symptoms and I would have to leave.
So the room became a catch-all place for stuff and gradually became really unsightly.
My solution was to put a screen across the doorway and not look.
But I knew someday I would be able to fix all that.
And now as the magic 7 approached, I decided the time was now.
So for the past few weeks I have been sorting, and throwing away, and going through.
I made 15 boxes of paperwork to be shredded. I am having a company come to the house to shred all that for me this week.
I threw away a lot of junk.
I took his desk chair for my own so now I can sit where he sat. 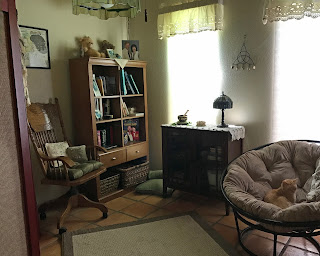 I cleaned.
And now it’s done.
It’s going to be a reading/meditation room.
Yesterday I smudged it. I bought some new pieces to put in there – a chair, a rug, a cabinet to house my crystals and singing bowls. I hung my Indian chime bells.
The cats and I are enjoying the space once again. I feel close to John in the room. His desk is still there - it's behind the screen. But I can read and meditate here and just be.
I think John would approve.

Posted by Joy Collins at 4:15 PM No comments:

Today is John's birthday - 74!
We've had some great birthday celebrations over the years starting with our first one together when he turned 35.
I am celebrating with him in my heart today.
Love you, Honey. 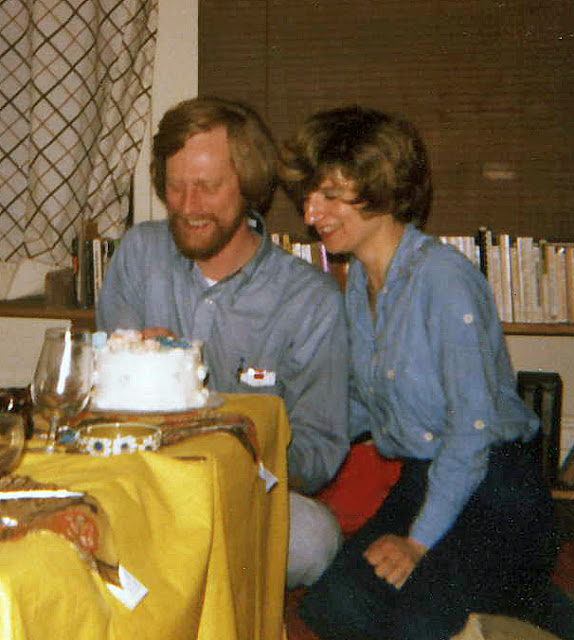 Posted by Joy Collins at 8:33 AM No comments:

My uncle - a man who has been a father to me - passed away after a brief illness this past Wednesday night.
I will miss him so much. 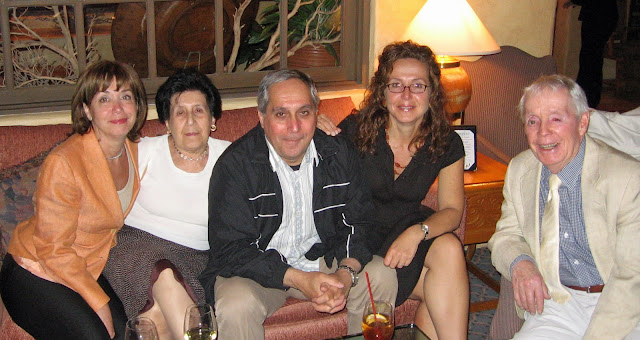 This is a video I made of some pictures of him. Give it a few seconds to load.