John and I loved to celebrate anniversaries. The usual ones of course - our wedding day [both of them!], our first date.
But John even made up some to celebrate. One of them he called Bunkie Day - the day we moved in together to start a new life.
Today is an anniversary too but it's not a happy one and not one I relish acknowledging and certainly not one I care to "celebrate".
Today marks 9 years since John passed. 9 years ago today I woke up to find my world changed. John had died and nothing would be the same ever again.
My love, my best friend, the man who made the world right no matter what, was gone from this life and I had no idea how I could go on.
But I did.
I made it my business once the shock wore off to continue our relationship. I knew beyond a doubt that John still loved me as much as I loved him and that his death was a change, not an end.
We were/are still married and we are still connected.
I knew if there was a way to stay connected we would find it.
And we did.
Today, John shows me every day that he is still here with me. Sometimes the signs are huge. Sometimes, they're small. But I see them and I smile and say Thank you and it gives me peace.
Of course, I still miss what we had and I yearn for what was and for what can no longer be.
I'm not saying this new relationship is better. It is what it is.
But. it. is.
That's what's important. We are still together.
And I know this may not work for everyone. That's OK. It works for us and it's what we want.
I had no idea where I would be today 9 years ago. There are days I still can't believe this has happened to us. But the raw horrible soul-destroying grief has subsided and for that I am grateful. I can find peace in our life and I look forward to our reunion.
So, I guess today I do celebrate. I celebrate our new life and how grateful I am that we have it.
Namaste.

Posted by Joy Collins at 7:22 AM No comments:

I love how our loved ones who have passed know just when to get our attention.
The next few days are going to be tough for me. The anniversary of John's passing is coming up soon and I am acutely aware of it.
The sadness that I am, for the most part, able to tamp down, is bubbling up more than usual. So, I have been talking to John and asking him to be with me. And he is letting me know that he hears me and is indeed here with me.
Yesterday I changed the wallpaper on my Alexa Show and instead of the picture I uploaded from my phone [a pretty cactus picture I had taken], John sent a picture of himself and after a few seconds it changed to a picture of the two of us. Then before I had a chance to even realize what was happening, it went to the correct picture.
Then today as I was out to running errands, I synced my phone to my car which automatically starts my music. Unless I specify an album, the phone shuffles my music which is what happened. The first song to play was “Lay, Lady, Lay”. John and I always liked that song. I had even made it his ringtone.
So, I knew that was him.
Then I waited to see what the next song would be.
It was “Let It Go!” from Frozen. That song speaks to me. It reminds me how John always told me to not worry so much. In fact, he used to put a smiley face on my finger in ballpoint ink to remind me when I would get upset about things. I even wrote about that in my book.
I think he was trying to say that again.
Thank you, Sweetheart. 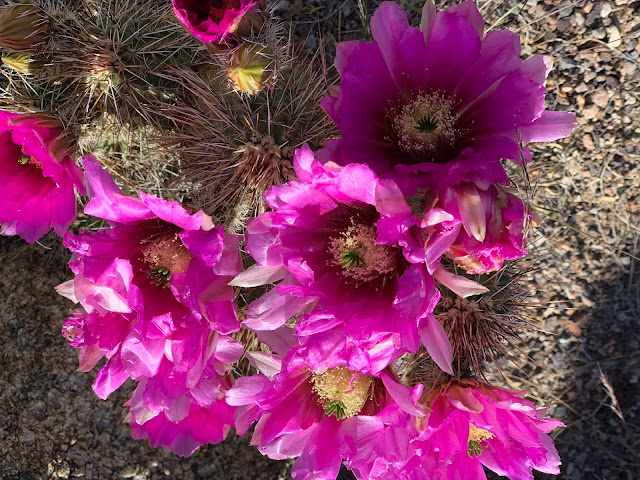 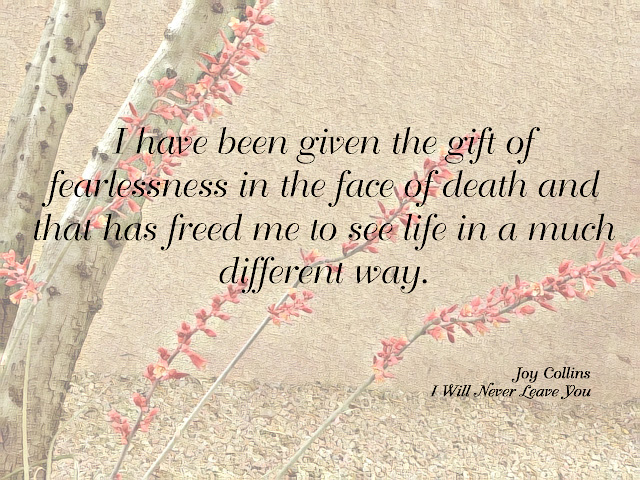 Posted by Joy Collins at 8:30 AM No comments:

I recently bought a new television for the living room.
Once I did, a whole cascade of events took place.
I rearranged the living room furniture so that I could sit closer to the new bigger screen and take advantage of the view.
The rearrangement now left me room to move John's desk from its old place in what used to be his office [now a room I made for meditation and reading] into a new place of prominence in the living room.
Now with the new bigger TV I wanted to watch my stored videos of our wedding and family vacations.
The old DVD player no longer worked so I trotted off to Best Buy and bought a new one.
That brought me to last weekend.
New DVD hooked up, I popped in one of the DVD's I had had made of films from a vacation from many many years ago.
It started off with John at the bow of a small ship [we were in New England somewhere - I no longer remember]. He was offering food to the seagulls following the ship and talking to me who was filming.
That was the thing. He was talking. You could hear his voice loud and clear. 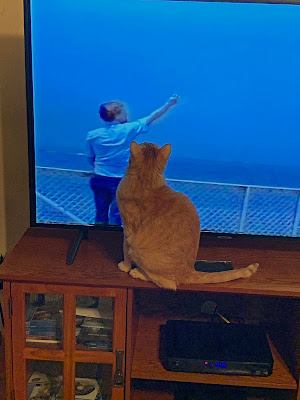 Suddenly, Riley, one of our cats who loved John so much, stopped what he was doing and jumped up on the TV stand and just stood and stared at John on the screen. He stayed there for several minutes until the view changed and John was no longer visible.
I watched in amazement and had to take his picture to memorialize it.
This little cat who had not seen or heard John in almost 9 years remembered.
He remembered the man he loved to snuggle with.
Who fed and cared for him.
Who loved him.
He remembered and he still loved him.
I have never believed in the "it's just an animal" viewpoint but I gained an even bigger respect for the souls of animals that day.
You can't tell me Riley wasn't remembering his Daddy.
The saving grace is that our animal buddies are very good in living in the Now. So when John was off the screen, Riley was happy to go back to what he had been doing.
I, on the other hand, sat and cried.
Namaste.
Posted by Joy Collins at 7:51 AM 1 comment: