I feel blessed.
I have been getting some very nice compliments and reviews on my book [since this was on a closed Facebook group I have shielded the group name and participants]. 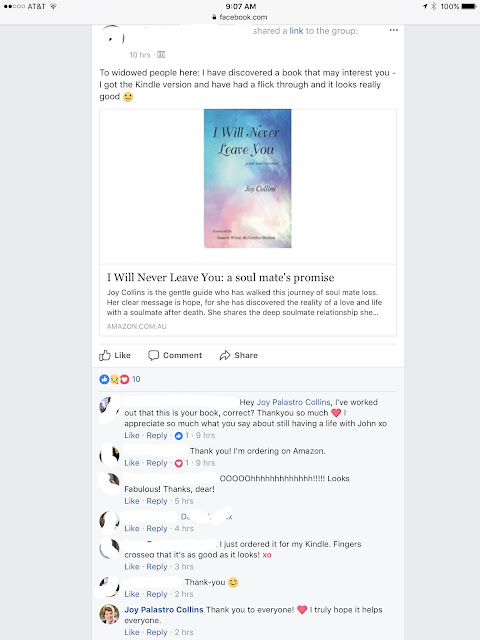 This is just a small sampling of what people are saying. It actually brought tears to my eyes to read all the good thoughts.
I couldn't help but wonder what John thought of all this. That evening, as if to let me know, I found this right in my path as I was walking back into the house. 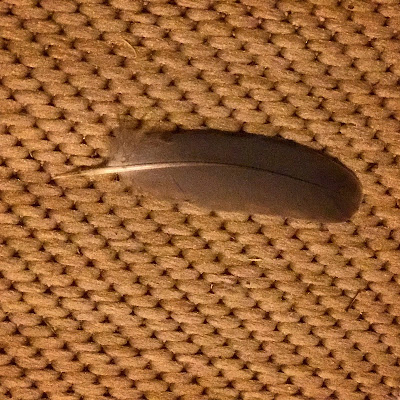 Thank you, John.
I didn't do this on my own. I know that. I had help from John and my Team on the Other Side. I appreciate all of it.
Posted by Joy Collins at 5:24 PM No comments:

I have been feeling very down these last few weeks.
I can't say I can identify a particular reason. Maybe it's because our wedding anniversary was the end of last month. One more day without him. One more big day reminding me we can't celebrate together in this world.
Or maybe it's not that. Maybe it's just plain old grief. No reason. Just grief. Grief doesn't have to follow any rule. You can be bopping along all confident and happy and then something - a scent, a word, a song - anything - will remind you of your soul mate and the grief returns and the sunny day is gone.
Or something will cross your mind and for a nano-second, your mind forgets and you think "I must remember to tell J - oh, wait, I can't." And the world crashes in on you. And just like that, the sadness, the longing - it all returns.
That's what it's been like for me recently. 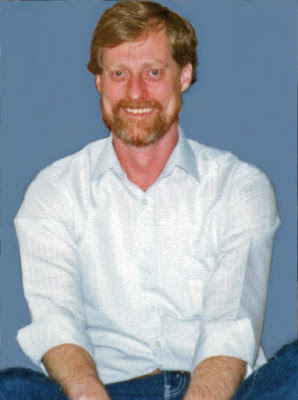 Not constantly.
But enough so that I am aware. Grief is an ever-present companion. An unwelcome roommate.
We have a detente of sorts.
But I would give anything for it to leave.
I miss my best friend, the man who made the sun rise and the birds sing in my heart.
The man whose smile made my day. Whose eyes lit up when I entered a room.
Whose hug eased my sorrows. Whose wise words helped me through life's trials.
Whose love cushioned me, surrounded me, gave me strength.
I forge on. I know I can do this grief thing.
I will make John proud of me.
But I still miss my best friend.

Posted by Joy Collins at 6:02 PM No comments:

We are still a team

It's been a heck of a past couple of days. Will get to why in a minute.
But first I am reminded of a saying that John was very fond of: "Things are happening the way they are supposed to." He said it so often it became a game between us. I would get upset about something, he would smile, and I knew what was coming.
Sometimes I would yell at him before the words even came out of his mouth. "I know! I know! Don't say it."
Or I would threaten to punch him if he said it.
But I got the point.
And time and time again since he has passed I have heard him say it in my head.
To the point that I now truly believe it.
Not to mean that things are predestined. No, what I believe is that certain things happen (that we agreed to) so that we could learn and grow from it - or not, if that is our choice.
So, to get back to my last couple of days. I am a big control freak. Ask anyone who knows me. I don't like sudden change and I am at my best when I am in charge. It was great when I was in management. It's hard as a mere human civilian. I always deferred to John when it came to things re the house.
And it's hard for me to ask for help.
But I'm learning.
In a big way.
Monday:
I was heading into the kitchen and "something" (or someone - I'm thinking John) told me to look up at the living room ceiling. Yikes! A huge spider. Not the little creepy kind that you can squash with a shoe. Remember we live in Arizona. Land of tarantulas and other horrors.
No, this was a huge spider - over three inches across from what I could tell. Possibly more factoring in distance from me and that his legs were somewhat curled. And he was at the uppermost area of my vaulted ceiling. I have a horrible fear of heights so getting on a stepladder and capturing a huge spider was out of the question. I texted some friends, including my handyman and my scorpion guy. I went on our local town Facebook page and asked for suggestions. That was NOT helpful (throw a brick and using a blowtorch were two suggestions). I called a local exterminator but since it was Labor Day (these things ALWAYS happen on a holiday) the best they could offer was a technician coming out the following day. Not good. 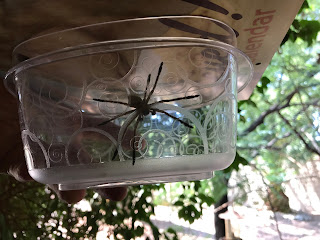 So I took a step back.
And started to talk to John, asking him for help. Right after that my handyman texted me back and asked me if I wanted him to come help. Yes, please!
He arrived in about 10 minutes and got to work. With the help of my ladder, a plastic container, and a stiff piece of paper, Mr. Spider was captured and then safely released in the front yard.
With some networking I found out it was a male huntsman spider, one of the largest species in Arizona.

Tuesday:
Turned on the shower in the Master bath - no hot water. Not good but, hey, I'm getting better at this Disaster-A-Day program. Called my plumber and they promised someone out by the end of the day. Then they called and said a technician could come within the hour. Was that okay with me? Duh! 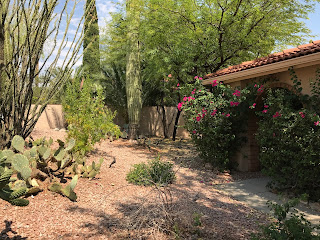 Oh, and by the way, his name is Johnny.
Really? I looked heavenward and smiled. I'm seeing a pattern here.
So, I corralled all the animals in safe quarters in case the plumber needed to come inside.  Johnny arrived and immediately saw the problem with the water heater and set to work. An hour later I had hot water. And happy surprise - everything was still under warranty so no charges.
Moral of the story as I am starting to see it:
I can do this problem solving thing. I have it in me. Even when it comes to taking care of the house.
And the other thing is this: John is still here. We are still a team. He told me once through a medium that he is still taking care of things. I believe that. He's just doing it through me now. I have to trust. Myself and him.
I'm learning.
Things happened the way they were supposed to.
Namaste.
Posted by Joy Collins at 3:18 PM No comments: