Today I attended the funeral of a friend of John's. Last night I went to the viewing. It was at the same funeral home where John's had been back in May. I knew it would be hard. I did not realize how hard it would be.
Today I cried all through the service as if it were John's. Because in a sense it was. I grieved for the family knowing what they were facing, what the days and weeks and months ahead would be like. Experiencing the services put me instantly back to four months ago, bringing all the emotions back up as if they were happening right now.
Why did I go? Because I knew John would have gone if he were here. I guess I was doing it for him. I also felt he was going to be there in spirit and I wanted to feel that we were doing this together. Call me crazy but I know he was there for his friend. I wanted to be there with him.
Posted by Joy Collins at 1:38 PM No comments:

My Love was suddenly ripped from me in the early morning on May 24, 2010 and for the last four months, anything I could think of to say seemed anticlimactic.
But maybe because some time has passed, I want to try to put into words what I am feeling. So many people ask me how I am and I struggle to answer. Honestly, I don't think they want to know. If I truly shared how I am I fear they would never ask again.
It has been suggested that I join a bereavement group. It's not something I see myself doing. I just don't feel like sharing. Don't know why except I just feel what I am feeling is private and I don't want it up for discussion with people I don't know.
I also have decided to stop sharing with just about anyone. I know it's a pain to hear what I have to say. I know people are probably sick of it by now and I understand that.
I'm a downer. People don't know what to say, what to do. I make them feel helpless and it's not what people want to hear or feel.
It's OK. I can do this by myself. I know technically I'm not alone. John's here. No, I'm not being crazy. I know he's passed on but we were too close to let death separate us.
It's been four months now and people have their own lives. It's all right. I'll be OK.
If I do share how I feel at this point all I get is "Time will heal, make it better." or "You need to move on."
Yeah, I get that. But unless you have had your heart ripped out in an instant and everything you had planned for your future with the only person in this world who mattered to you was taken away without so much as a hint of warning no one has any idea what I am feeling.
I'm not criticizing them. I'm not saying I have the mourning market cornered and I am the only one going through this.
What I am saying is that platitudes don't work and they don't help. In fact, platitudes make me angry.
No one can know what this feels like.
This feels so bad I would not even wish it on someone I didn't like.
Yes, a bereavement group would be made up of other people going through the same thing and that might be useful. But everyone's relationship is different. Knowing someone else feels the same way as I do doesn't really help me.
So, they feel that way too. So, I'm normal. I get it.
Now what?
See what I'm saying?
I just need to do this my own way. I need to do it the way it makes me feel all right. If that means keeping John's slippers under the dresser and keeping his name on the checking account, then that's what I'm going to do.
John's death has changed me. It's the most profound change I will ever go through in my life. I am never going to be old Joy. She's gone. Whatever Joy I turn into now is going to be changed by my experience. That's true of all of us. We are the sum of our parts, our experiences. And this experience is the biggest there is for me.
It may not be a bad Joy that I turn into, but it's going to be a different Joy.
It pisses me off when people look at me and tell me [like some do] that I seem better. To me what I hear is that I'm "getting over" John's death and things can go back to the way they were.
No, they will never go back to the way they were. Things are different now.
They will always be different now. Most people don't understand that. Because most people are threatened by that. Because it could happen to them too. And that's very scary.
Is there a point to this blog entry? I don't know. Maybe. Maybe not. Maybe it's just good to get it out.
Posted by Joy Collins at 2:12 PM No comments: 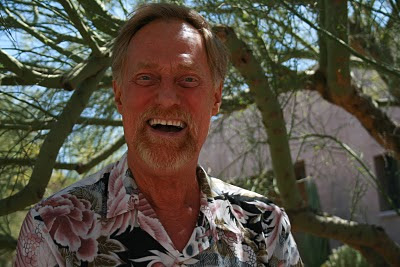 My sweet sweet love, my life, my soulmate has died. I will not say he is gone. He will never be gone. But he is no longer here with me in this physical world.
John and I just recently started getting Social Security checks and he qualified for Medicare and we often remarked to each other "How did these words creep into our vocabulary? Weren't we just flower children recently?"
Yet, now the words viewing and funeral and cremation are words I have had to utter. I am numb. I feel as if my heart has been plucked out of my chest. There is not an inch of this house that doesn't remind me of him.
We always told each other that we were true soulmates. That may sound trite but it was true. We both remembered the instant we first laid eyes on each other. It was as if our souls recognized each other. Why else would it have had such an impact on us?
I was offered the opportunity to say a few words of remembrance at his Requiem Mass but I knew I could never get through it so one of the women of the Church read it for me and did a beautiful job.
I want to leave those words here.

John was truly the love of my life and it is very hard to put the depth of my feelings right now into words so I’m going to just do the best I can.

My John was a kind and very loving man as I am sure all of you know. A testament to that is your presence here today honoring his life. What struck me time and again when I told people about his passing was how everyone always remarked about John’s quick smile and his hearty laugh. John loved life. Yet, John always told me he was not afraid to die. He knew there was unbounded Love waiting to receive him. He taught me that. He taught me a lot and I am so grateful to have had the life I did with him. I ache that it was so short. We had 32 years together but twice that would not be enough. We loved each other very much. I never doubted his love for a minute. It was my one constant in life with him. My only solace is that he is at peace now and I have eternity to spend with him when my time comes.
Posted by Joy Collins at 2:06 PM No comments: