Widowhood - one size does not fit all

Even though it has been a few years for me since John passed and I think, for the most part, I have come to terms with my new life and what it means for us that John and I are no longer on the same plane, I still read books about grief and coping because I am a firm believer in learning. Every little tidbit helps.
But I am seeing something else in all the books that I read (and I am referring here to those self-help books that speak to the every day issues of losing a soul mate - not the spiritual/metaphysical ones).
And it seems to me that even when these books are written by the widows themselves, they seem to feel that their experience can be translated to all widows and their advice is gospel.
Let me elaborate.
I am currently reading a book about reclaiming life after the loss of a mate. The book is written by a widow who was married to the person she feels was the love of her life. They were married for 25 years, first marriage for both of them. She has been widowed for 10 years. And she is now in her early 50's, was in her early 40's obviously when she was widowed and was the mother of two teenagers at that time.
About 30% into the book she sneaked in the fact that she has been in a relationship with another man for the past several years.
The plot thickens.......
Mind you, I am not critical of the fact that she is in relationship. No one wants to be alone.
What I am critical of is that she assumes her situation can just be translated into all situations.
Yes, she had some good ideas that resonated with me. But overall she was speaking as a younger woman and what she was feeling did not necessarily apply to every other woman (or man, for that matter) in the same grief situation. She was still working, raising children, had her own home, a large support system, and was financially well-off.
Her philosophy was "get out there, seize the moment, remake yourself! You can do this! Rah! Rah! Rah!"
Compare that to an older woman whose children are grown, who might not have the same support network, who might be on a fixed income, facing deteriorating health and friends dying off, who has been with the love of her life for 60+ years.
Or a widow who was in her second marriage after having had a bad first marriage - and now has lost again.
Or the widower who has suffered other losses - maybe a job at the age of 50 and now is facing decreasing job opportunities because of his age and then loses the one person who meant the world to him and was the rock in his sea of sadness.
Or...
Or...
Or...
The examples are as endless as the people involved.
My point is this. Yes, these self help books are useful. But those who write them need to step back for a moment and realize that what works for some does not work for all.
Maybe we don't want to remarry.
Maybe we don't have the luxury of going to a widows' retreat and "remake' ourselves.
Maybe we don't see this as a chance to do the things we've always dreamed of. Maybe what we always dreamed of has just died with our mate.
I am not critical of those who re-mate after loss. More power to them.
It is not for me and I know that.
And I also know that the choices I make for me are not the choices another widow or widower might make and that is also right - for them. It is not my place to criticize, judge, or preach.
Nor it is anyone else's.
Write the books. Give advice. Let your life be an example of possibilities.
Just not from your Mount Olympus on high as if you have all the answers.
Because you don't. You have one set of answers.
One size of healing does not fit all.
There are as many ways to move forward from loss as there are the people who move forward.
Namaste.

Fear of flying, dying, and living

Recently, a woman in a Facebook group I belong to that is made up of men and women who have lost their soul mates posted how she had no love for life any more and just wanted to die and be with her mate. She was not suicidal, just bereft and no longer experiencing any joy in life.
Sadly, I can relate.
Ever since John died, it is harder to love life as I did when he was here.
But I know it is my soul's job to do it anyway.
Remember the book Fear of Flying by Erica Jong? Women of my generation [the Boomers] saw it as a revolutionary book, part of that daring wave that ushered in the feminist movement. It was a catalyst that jump-started a new way of thinking for women. Like it or not, a revolution full of women of courage and free-thinking had begun.
In my opinion, death of a soul mate does the same thing to widows and widowers.  I used to have a fear of dying.
I don't now.
And it wasn't so much the dying part that scared me. It was the death part. It was that great unknown after the dying part that kept me up at night.
Then when my mate died, I added another fear. Fear of living.
I didn't see how I could go on without him. How would I cope? How could I get through a day without him to share with, to talk with, to love with?
And then things slowly changed.
The loss of my soul mate started me down a path that surprised me. The desire to know where he is and how he is caused me to study with a vengeance I didn't know I had.
It gave me opportunities to learn and grow.
It brought friends into my life I never would have had.
It gifted me with a strength I never would have believed.
It destroyed my fear of living and dying. Now I know I will be reunited with my mate and I look forward to it.
And I can make the most of the days I have here until that time as well.
I can write and reach out to others.
I can appreciate a sunrise and time spent with friends.
I can enjoy a book while curled up on the sofa with my cats and my dog.
I can live and I can look forward to death, enjoying both and fearing neither. 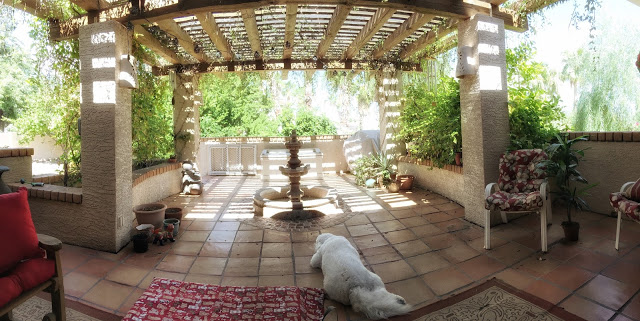