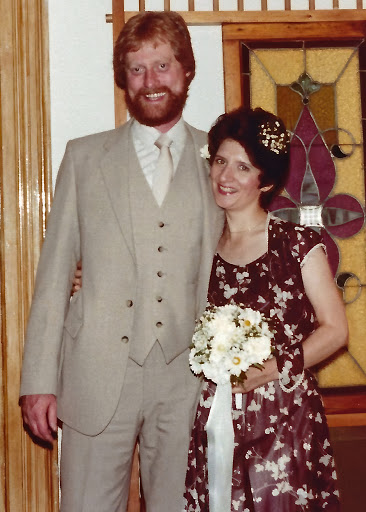 Today is our wedding anniversary.

39 years ago today I married my best friend, my soul mate, my Twin Flame. The person who knows me best in all the world, who always has my back, who loves me as I have never known love.

And today I miss him so much.

And John came through!

This morning, I walked Bella in our backyard, first thing in the morning as always. Then we came inside and I gave her her breakfast. But she asked to go out again afterwards. I thought this a little odd, but oh, well. She knows what she wants.

As soon as we went outside she went over to something on the deck. 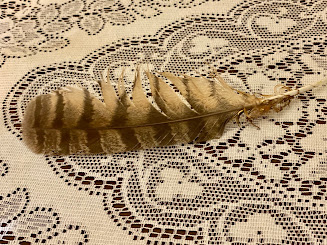 When I checked it out, it was a beautiful owl feather! It had not been there before when we went out. It was right in our path. We would have had to pass it. No, this was newly arrived. Maybe John told Bella to go outside so that I would see his gift? As it turned out, she didn't want to "do" anything except sniff around. But if we hadn't gone out just then, I might never have received this wonderful anniversary present from John.

Posted by Joy Collins at 6:32 AM No comments:

Our departed loved ones never leave us

This pandemic has all of us on edge. I am no exception. In fact, I am probably the poster child for worry these days.

I have OCD tendencies. Add in my nursing knowledge and you can visualize how I have become a cleaning fool.

Last weekend was a perfect example. I finally gathered up my will power and ventured out to get gas for my car. The idea of interacting with the world was crippling. I have not been out of the house in months but I promised myself I would do this. I needed to do this.

It went well. But coming back home I worried what I had infected my car with. So I brought out the Lysol spray and wipes and cleaned, cleaned, cleaned my car. In so doing I noted a flashing light under the dashboard that I swore I had never seen before.

I checked my car manual. Wasn't there.

I googled and couldn't find an answer.

After an hour of searching, I decided to bring the car into the driveway so I could get a better look [I had been cleaning the car in the garage].

As I drove the car into the driveway I had a sudden strong whiff of John's cologne. By this time, the Lysol smell had dissipated. There was no mistaking what I was now aware of. It was Obsession For Men, what John always wore.

I took this to not only be a sign from him that he was with me but that I should not be worrying.

Sure enough, another Google search got me my answer. The light was for the anti-theft device on the car and was telling me that it was working. Why I never saw it before I don't know.

The bigger takeaway for me was that I was not alone. and for that I am grateful.

The worry is still there. Some days it's worse than others.

But I am comforted knowing John is still with me, still watching over me, still aware of what is going on with me.

It's a lesson for all of us.

Posted by Joy Collins at 8:01 AM No comments:

The dreaded "You need to move on"

For those of you who have lost someone you loved and miss so much now - how many times were you essentially told you were mourning too much and it was time to "move on"?

The last thing we want to do is move on and leave our loved one behind. Yes, it’s natural to cling to their memory, to thoughts of the life we had with them. But looking down the road without them is not only frightening and upsetting, it will make us feel worse. It’s hard enough to miss them now. But the thought of never having another conversation, another hug, another memory together, can be downright shattering.

So, we get our feathers ruffled when someone tells us we are supposed to move on. But I am not talking about stagnating in place and not getting on with the business of living either.

Remember the character Miss Haversham from Charles Dickens novel Great Expectations? Miss H was a wealthy spinster who fell in love with a young man who conspired with her relative to swindle her out of her riches. On her wedding day, while she was wearing her wedding dress and preparing to go to the ceremony, she received a letter from her fiancé and she realized that she had been defrauded and the wedding was off. She was both humiliated and heartbroken and suffered a mental collapse. She lived the rest of her life stuck on that day – living alone, wearing her wedding dress, keeping the clocks set at the exact time when she received the fateful letter, and leaving the wedding breakfast and wedding cake on the table. So, I do not want us all to turn into little Havershams. But neither am I advocating that we go on as if our loved one is gone and it has not affected us.

That we move on as so many tell us, and continue as if we have not suffered one of the greatest losses life can throw at us, is cruel and heartless. It does a disservice to us who mourn. So, what do we do? We move forward, incorporating our loss into who and what we are now and we create a new relationship with our loved one, making them part of the different life we are living. 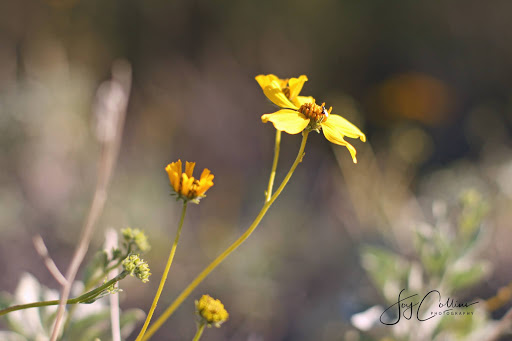 Is this pure fantasy on our part? Do our loved ones want to be part of our continuing life here on Earth? Does love really go on after death? I hear your skepticism. I had it too. And believe it or not, even after all this time since John has passed and thinking that surely people know me by now and know how I feel and what I believe, I still get remarks from some people telling me that John wants me to be happy but only if I move on and let him go; that my clinging to him and our love is “holding him back”.

Nothing could be farther from the truth.

And I know that because John told me that himself. I had a reading earlier this year from the wonderful evidential medium Mollie Morningstar.  You might remember from my first book that Mollie gave me my first one on one reading back in 2011. This was my third reading with her. She brought through new information that no one could have known. But one particular bit of information stood out and it was something John said to me through her in the very beginning of the reading. John started out by singing a song to me. John had a beautiful voice and sang semi-professionally when he was alive. He often serenaded me while playing along on his guitar. This time he was singing and telling Mollie that he was so in love with me. And he also said that our love had grown, that it continued to grow, that his love for me had expanded. He wanted to share that information. It made him happy. He said the torch of his love still burned brightly and we were still in love.

And it was all right if I chose to remain single. It was up to me.

That was a powerful and important message for me. But it is also important for you, too. Whether it is a spouse, or a friend, or a relative – that love, that relationship, is not dead. The love is not stagnant or gone either. It goes on. It grows. It doesn’t hold us back and it doesn’t hold them back. It also doesn’t mean that we can’t remarry (if we choose to) or that we can’t keep living and enjoying our life here on Earth. It does mean that we can continue in relationship with that person in whatever way we want to. And we don’t have to justify that to anyone.

I have also experienced benefits from practicing this new form of communicating and intimacy. By focusing on Spirit, I have come to a new level of my own spiritual practice. I have learned new aspects of what I believe the Afterlife to be. None of this would have happened for me if I had not pursued a new relationship with John, if I had not been forced through necessity of learning how to continue our love and relationship with him in his new vibration.

I wish the same for you.

Posted by Joy Collins at 8:56 AM No comments: