A sweet moment in time

I had a beautiful short dream this morning as I was waking up. I dreamt John and I were making dinner together in our kitchen. He was actually talking to me and I could hear his voice.
Then, as I was waking up, I was thinking [still half-asleep] that instead of making dinner why didn't we go out to one of the restaurants here in town that we like so much.
I even remember wondering why we hadn't been there in so long.
And I remember the good feeling, thinking that we were going to go again. It lasted about 2-3 seconds. Maybe a couple of seconds longer. I remember actually looking forward to going to dinner together.
And then, as my mind cleared and I became more fully awake, I remembered why we hadn't been there.
And my heart sank.
The good feeling was so good.
And the sad feeling was so sad.
But at least I had that good feeling again. It still lingers with me a little. It was so sweet.
Posted by Joy Collins at 7:11 AM No comments:

Yesterday marked 26 months since John passed. I didn't post anything because I honestly don't know what to say at this point.
Part of me can't believe that much time has passed already. Part of me still can't believe this has happened.
And all of me is still very sad. And lost.
John's quilt is progressing and is almost complete. 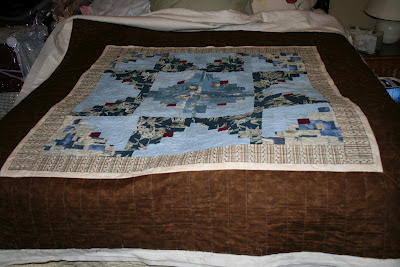 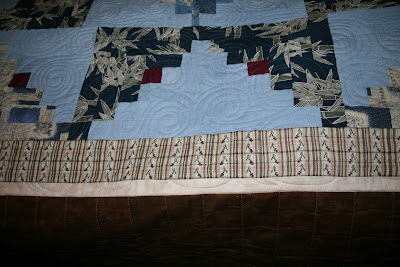 The only thing left to do is the appliques, deciding how wide to make the brown border and put the edge binding on.
I love it. It will be so nice to have John's shirts to wrap myself in.
Posted by Joy Collins at 10:05 AM No comments:

John's love made me what I am today. He saw the best in me. My job now is to live up to what he saw in me. Thank you, John.

Missing John so much.

Posted by Joy Collins at 8:41 AM No comments:

I wish I had a time machine

Still trying to make sense of the coupled world

A friend who also blogs about her grief journey wrote today about being uncoupled by death in a coupled world.
It's nice to know I am not the only one who feels this way. Our entire society - movies, songs, books, commercials, etc - is geared toward the trials and tribulations of being in or out of love. Those of us who are suddenly without our partners because of death are invisible. No one knows how to deal with us. Consequently, we are encouraged to "get over it" and "move on". I guess we're inconvenient.
And that attitude bothers me.
I know it's partly because grief scares people but that doesn't help.
For instance, I HATE the Cialis commercials. Yes, they are goofy anyway but it bothers me to see the depiction of people in love.
Another example - I can’t walk past the men’s counters in department stores without getting upset.
It’s very hard to be a bereft in a coupled world. I don’t like to refer to myself as single because I don’t see myself that way. I am not looking for another mate and identifying myself as single, in my mind, implies that.
I HAVE a soul mate. He is just on another plane. But it hurts to see people together for so many years in their marriage when ours was cut short.
It would really help those who mourn if we could be cared for instead of swept under the rug. As if our grief was just a small thing. Like losing a coat or misplacing your keys.
They’ve even now coined a new phrase for us who mourn “too long”. Complicated grief.
Is there a simple grief? What does that look like? And what constitutes “too long”? Is there a secret mathematical formula? Years together divided by length of separation?
Give me a break. Walk in my shoes for a while and get back to me. Tell me how complicated my grief is then.
Posted by Joy Collins at 7:55 PM No comments:

I attended a get-together at  a restaurant with some friends last evening. It was nice. I enjoyed the company of these people. I had gotten to know them over many years through John and they had become my friends as well. And they have been very supportive and caring towards me since John has passed. I want to make that clear.
Because I felt uncomfortable last night and it was not because of any lack on their part.
Everyone there was coupled except me. Everyone there was a husband or wife and I was...what? The token widow? No, that's cruel. I was their friend. But I was alone. At one point I sat there and looked around me at all the animated faces and the happy conversations and I felt so alone. I was in a crowded restaurant in the company of 12 people and I was alone. Number 13. The odd one. The one who was missing her partner so much. Who was remembering other times and other gatherings and being there with John.
Who wanted to run screaming from the room.
When I was first invited, I objected. I voiced an uneasiness at going for that very reason - I knew everyone there would be coupled and I would feel awkward.
Maybe awkward is the wrong word. Maybe there isn't a word to describe what I felt - or I don't know what it is.
And maybe what I felt was more than one thing.
I didn't feel unwanted. On the contrary, I felt very accepted and very loved. I know if there was anything I ever needed I could call on any one of those people and they would be there in a heartbeat.
It was the situation. Not them.
I was acutely aware that I was going home alone. Being there with all those partnered people made me feel all the more adrift. It reminded me that John was not there with me. It caused me to miss him even more, if that's possible. It saddened me.
And it's not something that someone can understand who arrived there and went home with their spouse.
So I think I may avoid those situations as much as I can in the future. It will be hard to get others to understand and not get their feelings hurt. I don't want to hurt anyone but the sadness I felt took away from the joy I was seeking by being in the company of these people. Maybe that will change over time. Maybe I will learn to deal with this better. But for now all I feel is the hurt and sadness.
Posted by Joy Collins at 8:13 AM No comments:

We had 32 wonderful love-filled years together but I wanted 32 more. Missing you so much, John.