For many of us, losing a furchild is very devastating and extremely sad. Our furchildren are truly part of our family and the grief at their passing can be profound.

My cousin Cynthia and her husband Alan recently suffered the loss of their two-year-old yellow lab Cody.

This is the tribute she wrote to him and I want to share it with you. 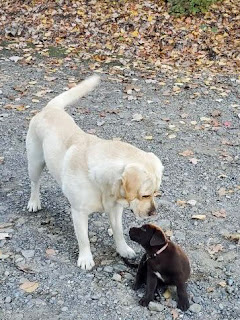 
From his first steps, as a little tank of a pup, struggling to make it up the steps of our back porch; with his stubby short legs to his last joyful romp in the woods as a full grown two year old, Cody was a comet that streaked across our lives, leaving us way too quickly. Despite this, it was as though Cody bent time, making the time he spent with us feel like so much more.

Watching Cody enjoy the simplest things, made me ponder whether he had been a person in a previous life and now, for the first time, got to experience making the most out of being a dog. Cody took every minute and extracted all the joy it had to offer. This was especially obvious when he’d dive head first into the grass or snow enjoying, I am sure, the thrilling sensation of gliding on it at considerable speed.

His happy, loving disposition was infectious to humans and canines alike. One of his best buddies, a female pit bull named Logan, had a reputation for refusing to play with other dogs and was known to be aggressive towards any who tried. However, with Cody, she’d let her guard down, as they’d endlessly chased each other through the woods, swam, wrestled and affectionately nuzzled each other at the end of it all. Never once did Logan show aggression. Cody managed to convince Logan to allow another female, named Astra, into their pack.  Cody’s ‘best girl’, a Golden retriever named Camilla, hated to leave her weekly play dates with him, so much so, that she had to be forcibly put into the car. His best ‘guy buddy’, a Standard Poodle named Misha, would make crying sounds each time they met up for their weekly round of wrestle and chase.

Cody’s altruism shone through and his canine brethren picked up on it. His drive to make friends with other dogs was unstoppable. No feat was too big to overcome to meet another dog. Cody was known to, on more than one occasion, swim across a reservoir upon spotting another dog on the other side.

Cody’s love of life and others was infectious. Whether they were casual acquaintances that he’d met during his regular morning walks, or his trips to the local hardware store,  or to Alan’s haircutter and if can you believe this, to our accountant’s office, where everyone lit up when Cody arrived.

Cody came into our lives when we needed him the most. It was a time when the future of our marriage was most at risk. Cody proved to be the perfect tonic. And, Cody unknowingly helped another member of his human pack to persevere through a difficult loss, lifting her out of the depths of depression.

Like all comets, the beauty and excitement that Cody brought into our lives was gone too quickly. But by giving so much during his short time with us, we have many loving and fond memories of this little tank… named Cody.