Don't let anyone besmirch your aura!

* I wrote this post in December 2018 and I think I need it now more than ever. Maybe you do too.* 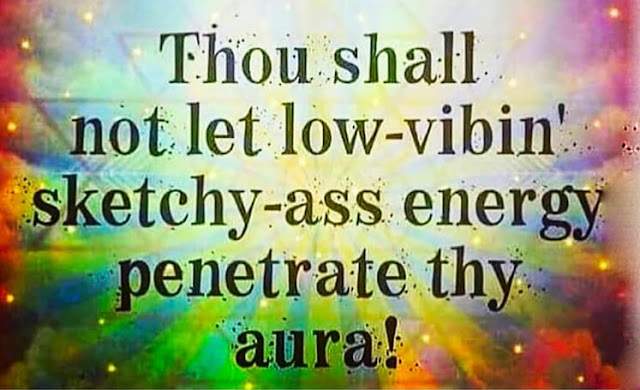 This saying makes me smile for two reasons - because it's true and because it reminds me of John.
Many years ago, he decided to take a year off from nursing and joined an MLM company selling ozone air purifiers. John has always been a very good salesman and we believed in the product and him.
As it turned out, the year's selling proved less than successful so he went back to being a nurse and was very happy. But not before having some interesting experiences.
One in particular stands out for me.
One afternoon John came home after spending about an hour at a woman's home trying to explain the advantage of our machines. John told me how she had one complaint after another, finding fault with everything he said. It soon became clear that John was not going to make a sale and why she had even agreed to the demo was beyond understanding.
John laughed as he told me how he finally reached his limit, stood up, and said to her "You are besmirching my aura! Sorry, but I have to go." and he left.
A little background - John and I had been on our spiritual journey for several years at that point - studying Wayne Dyer, Deepak Chopra, Gregg Braden, The Law of Attraction, etc. We were becoming quite comfortable with that aspect of our life.
So much so, apparently, that John felt his inner peace was not worth sitting and experiencing that particular woman's negative energy.
Good for him!
And that is the lesson.
Our inner peace is both important and valuable. Some people are just energy vampires and it's perfectly okay for us to protect ourselves from them. No matter who they are.
I remember another occasion when John and I were in a restaurant and we could just feel the uncomfortable energy emanating from the table next to us. The couple seated there were obviously not happy about something - more than likely with each other. Regardless, it was palpable and we changed our table and immediately felt better.
There is a woman in our local grocery store who is always scowling and complaining about something. I can't tolerate being anywhere near her and will change checkout lanes to avoid her.
Sometimes, you can't avoid the situation. Do the best you can in that instance by slowing your breathing. Concentrate on a good thought. Visualize drawing your energy sphere closer in to yourself so that you are not touching the other's negativity.
Just remember, it's okay to protect yourself.
Don't let anyone besmirch your aura!
Namaste.