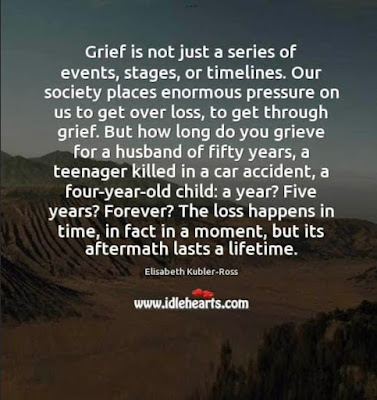 I have been a big fan of the TV series The Resident. I admit I love most medical dramas dating back to Dr. Kildare and Saint Elsewhere. It's in my blood. I'm a nurse.

So, I have watched every episode of The Resident and was anxious to see how they were going to script the departure of one of the main characters Nic, the wife of the title character Conrad. The actress who played her was leaving and so, in typical TV fashion, she had to die and her death had to be wrung out over an hour. I think it was well done - they used the episode to shed light on how organ donation can help other people.

The next episode dealt with Conrad's grief and his need to find out why and how she died [it was reported to be in a one car accident]. I thought that too was handled very well. Conrad was bereft and, as many of us who have lost someone ask, the burning question is Why - that need to make sense of something that will forever be senseless to us.

But then the producers and writers missed a golden opportunity in my opinion. They jumped ahead "three years and change", as they put it. As they explained it, dealing with grief "in real emotional time, would be dark. We didn’t want to have Conrad grief-stricken for an entire season of television.”

And that sums up how our society in general deals with death and grief. Let's put it in a box. Don't want those death cooties messing everyone else up. Let's smile, be happy, MOVE ON. How many times has a grieving person been told that? "She wouldn't want you to be sad." "You need to [fill in the blank]..."

I'm not advocating sitting on the sofa in your jammies among a pile of used tissues. But ignoring grief won't make it go away. And portraying that grief is messy and we need to jump ahead to avoid it is not a message I think is healthy. Maybe it makes for good television but that message isolates those who are mourning and makes them feel like pariahs.

So, while Conrad is now looking toward new romance in his life and Nic is now in the past, those of us in the real word need to know that there is no timeline for grief. Mourn as you feel you want to. Take the time that you need in whatever way that means for you. Don't compare yourself to anyone else. We don't get to jump forward in real life and make everything all better.

But we can move forward with our Loves in our heart and have meaningful lives while we are still here.