The holiday season has been very hard and very sad for me ever since John passed. But this year was especially difficult for me. I think it was because of the pandemic causing so much isolation. In other years, I would have been meeting with friends, exchanging gifts, going to holiday musical presentations, etc. This year there was none of that and the forced isolation made an already sad situation worse.

But I tried to make the best of it. I still put up my Christmas tree. Telephone calls and Zoom visits helped. And of course there was the ever present Facebook.

People have criticized Facebook over the years for one reason or another but, if nothing else, it has fostered a feeling of closeness and connection like no other platform. And I am grateful that it has brought me closer to my cousin Diane. Diane is the daughter of my father's brother. She has two older brothers that I grew up with. But Diane is the youngest and there is a big age difference between us. By the time she was only a few years old, I was already off to nursing school and out on my own. Our relationship never grew.

Until a few years ago when we reconnected. I am happy to say we have become friends since then and keep in touch, often through Facebook. And this Christmas she gave me a gift like no other. 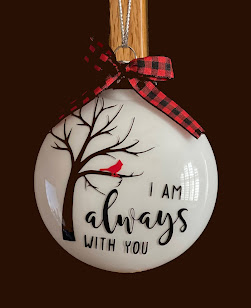 A few weeks before Christmas Diane told me to watch for something in the mail. I assumed it was a Christmas card. She informed me it wasn't. It was something small but not a card. The mail was especially slow this year (as it often is around this time of year). Nothing arrived before Christmas. Diane kept checking and my answer was always "Nothing today."

Then, on New Year's Eve, a puffy envelope arrived. Sure enough, when I opened it, a card fell out saying "Merry Christmas!" from Diane. I pulled out a beautiful Christmas ball that she had apparently had made just for me.  On the front was a tree with a cardinal and the words "I Am Always With You". That immediately touched me because of the similarity to the title of my book about John and also the cardinal is a symbol of connection to a loved one in the afterlife. 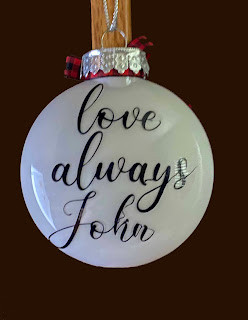 But John and Diane weren't done yet. I turned the ball over. What was written on the back stopped me in my tracks. I expected to see Diane's name but I started to cry as soon as I saw what was written there. John had used Diane to get a message to me. I was feeling sad and alone and missing John like crazy but he was telling me that I wasn't alone.

That our love goes on.

That he is still here with me.

And thank you, Diane.

You have no idea what this means to me. What a loving thoughtful thing to do. This gift hangs in my office right next to my computer so I can look at it all the time. It's too precious to put away with the Christmas decorations. It's a reminder to me from John and Diane. I am loved. I am not alone.